If you are ready for an exciting day of fishing contact Captain David Dietrich with Adventure Angling before the best tides are taken! 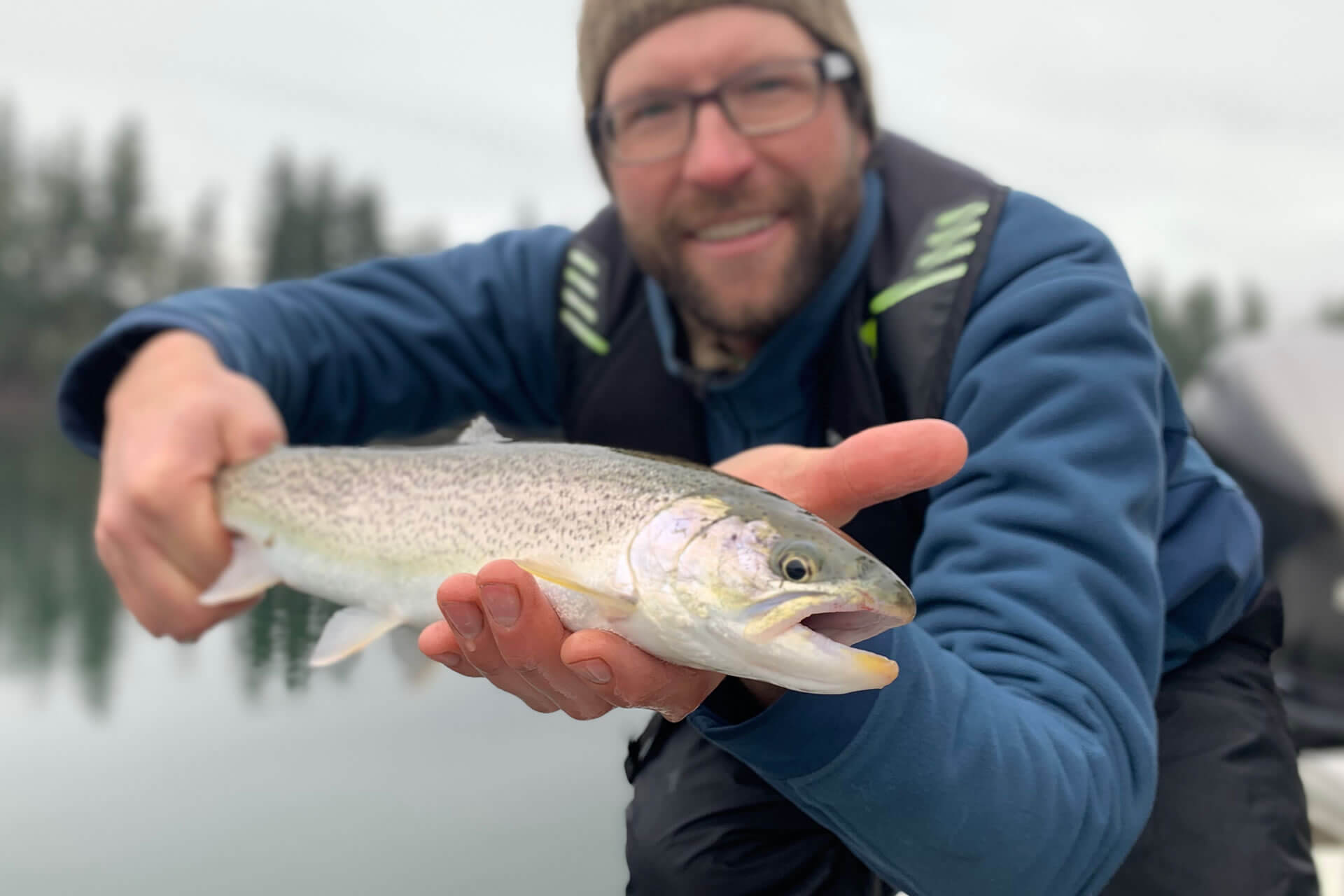 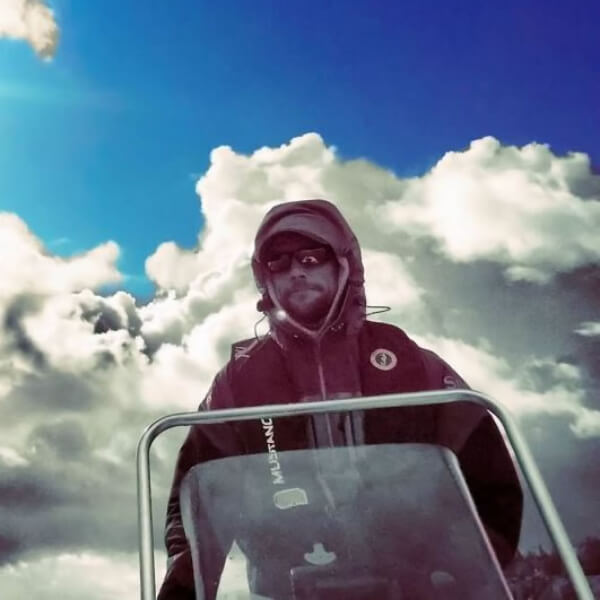 The land above the waterline is almost as important as the land below the waterline. A successful cutthroat fisherman will develop an understanding of how the right shoreline not only creates habitat for fish, but also contributes to the ongoing wellbeing of our beloved trout.

Founded in 2012, Adventure Angling seeks to provide fly anglers with an elite saltwater trout experience.  Working every month of the year, Captain David Dietrich is uniquely equipped to ensure your day on the water is all it can be.  Many anglers pursue coastal cutthroat seasonally.  Adventure Angling is the only charter operating every month of the year on the shores of South Puget Sound.  We fish out of a beautiful Ranger RB190 outfitted specifically for fishing in the tidal streams.  The boat is furnished with premium fly tackle and each rod is set up for optimum fish catching.  Expect education to be a part of your trip.  From casting to landing fish, we will spend time on each element of your fishing, honing your skills as the day progresses.  There is a lot more to fishing than what’s happening with the rod and reel.  Understanding the environment is critical to long-term success as a fly angler in any setting.  Perched above the clear water, you will be immersed in the environment of the fish, the elevated platform offering you a glimpse into their behavior only visible to boat anglers.  After a day with Adventure Angling, you will come away with a new understanding of our native sea trout and a greater appreciation for their place in the Salish Sea. 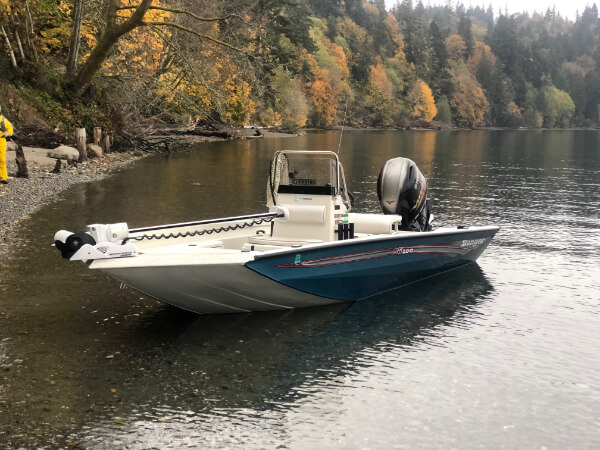 How I Came Into Fly Fishing
I came to fly fishing as a young adult.  My brother and I were sitting on my parent’s balcony overlooking Commencement Bay in Tacoma when we saw dark moving clouds in the water, in the middle of the bay.  Occasionally we would see a fish jump in the middle of one of those dark clouds.  After some time of watching, we realized the fish we were seeing had to be large because our distance from them.  We then noticed that one cloud of fish was moving towards a shoreline park in the Thea Foss waterway.  At the park we saw yet more fish and a few fishermen catching them.  Excited, we ran to our storage unit and found our old bass gear and headed down to the park.  Once we got there, a local fisherman took pity on the two of us throwing rattle traps at the salmon and outfitted us with a buzz-bomb. We were off!  That first day we caught fish until our buzz bomb was gone, so we headed to Sportco to buy more for the next morning.

We were at the park early the next morning and found the number of fishermen had dramatically increased.  The fish were just as numerous, and the buzz-bombs were already flying.  We found a spot and joined the melee.  While the fish jumped in almost every direction a cast could be thrown, the catching was infrequent at best. After a while I stopped fishing and began watching and that’s when the hand of fate intervened in my life.  I don’t know where it came from, but a boat appeared. 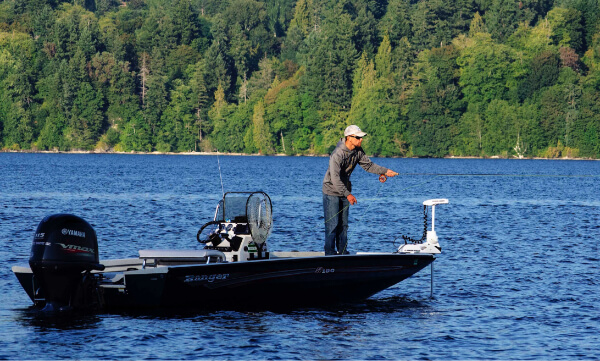 This boat was the oddest watercraft I have ever seen in my life.  It was an exposed bamboo frame with a thin yellow plastic lashed tightly around it and tied with zip ties around the top bamboo bar.  The angler sat on a bamboo cross beam with a bamboo deck at his feet.  Once he had rowed this bizarre craft into range, he stood up and fired a fly cast into a school of fish.  BAM, he immediately hooked up.  Over and over he caught fish as the bank anglers struggled to produce with any variety of lure they had.  I counted 13 bank fisherman throwing conventional gear, and he out-fished them all with a combined ratio of at least 7:1.  As a result we were quickly in the car once again and headed back to Sportco to buy ourselves a fly rod.  Being students at the time, we had no money, so the price of admission into this new fly fishing world came as a sudden, shocking reality.  We asked our dad to buy us a fly rod and reel to share because we couldn’t afford the $100 it costs to buy the cheapest fly rod we could find.  Dad outfitted us and even bought us a VHS video about casting to help us in our new distraction.  With a little practice we were catching pink salmon every day for weeks.  I’ve never recovered from seeing that fly fisherman catch fish like he did.  I’ve never seen him since then and I still haven’t ever seen another boat like the one he rowed over that morning.  He hooked me on fly fishing, for which I’ll always be grateful, and I’ve been hunting the beaches of Puget Sound ever since.